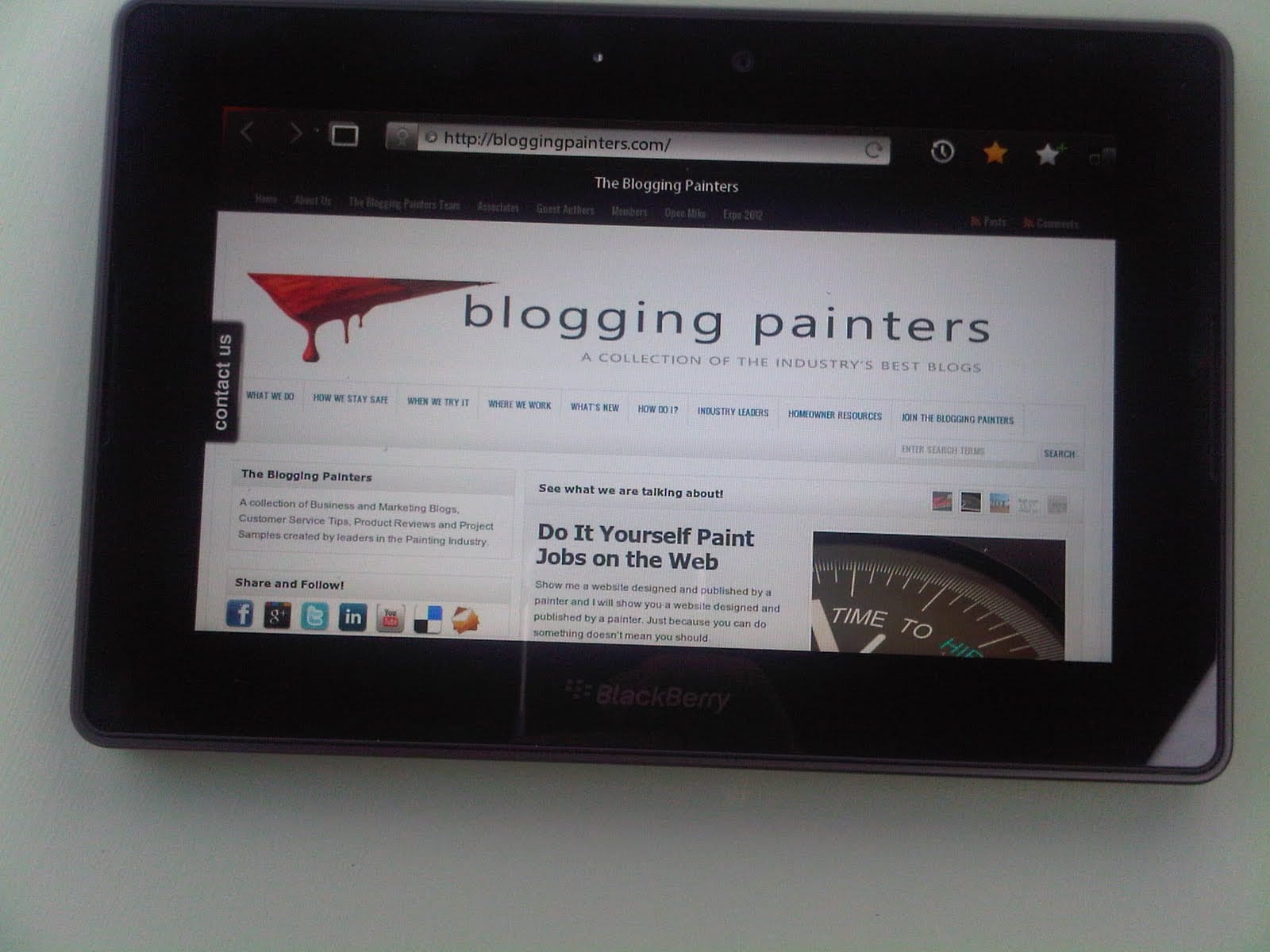 Small Paint Businesses my even be worse because you probably work in the field, in the office, estimate, pick up supplies, answer emails, manage social media, set appointments and so much more.  Many of us try to carry all the tools we need plus a small mobile office. In most cases that means a day planner of some sort, a printer, a notepad or book, presentation materials, camera, video camera and if you utilize estimating programs, a computer. 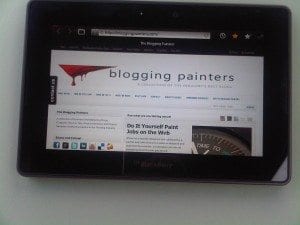 In an effort to downsize my mobile office and do more with less, Family Professional Painting purchased a Blackberry Playbook tablet.

Not wanting a piece of fruit, we chose the Playbook for several reasons. It supports HTML5 and Flash 10.2, so you can experience the web just like on your computer. Two, it integrates with our current Blackberry phone, which allows us to access our emails, contacts, or any files stored on it and view it on a 7” screen as opposed to the tiny screen on the phone. You can also perform true multi-tasking. Surfing the web while answering an email and playing a game. It can have several tabs open simultaneously.

A small package at about 7 ½” by  4” it is portable, it can fit in the pocket of my cargo pants or the inside of a clipboard. Lightweight at .9 pounds (425 grams for the metric guys) it is very easy to carry.
We found the User Interface easy to learn and Blackberry hosts a bunch of tutorials on it’s site. You control most functions with finger swipes and pinches for enlarging/reducing items on the screen. Battery life is good and will hover in standby for most of a day.

The Playbook also has good multimedia capabilities. Shot video of some water damaged and cracked drywall for an absentee home owner and posted it to a secure You Tube page. Shot video for The Blogging Painters (See the article “Say Goodbye to Drywall Dust.”) Shot pictures of problem on another job and emailed to homeowner, which landed additional work. All of this with 1080P HD video and 5 MP front and 3 MP rear cameras.   Plus there is an HDMI outlet that lets you watch videos on your TV or even perform a power point presentation.

On the office end, there is a the calendar on the phone to keep track of your schedules, a Docs to Go app that lets you do some minor editing of word and excel docs plus a power point presentation app for helping you on sales calls. There is also an Accuweather app to keep you from leaving the job too soon because it looks like rain.  If you are one of those who use social media, you won’t be letdown by the apps that come installed. Facebook and Twitter are supported as is Yahoo mail, AOL mail, Hotmail and Gmail and there is an Adobe Reader for PDF’s.

Too Good to be true?

If it sounds like this is a love fest with my Playbook, there are some drawbacks. I use Benjamin Moore’s excellent free estimating app. The “Doc’s to Go” program sees it as a read only excel sheet and won’t let me enter the info to perform estimates on site. Fixed that by loading it to Google docs, also wrote a scaled down excel sheet to use. Plus there in no native email. You must have a Blackberry Phone to access email, unless you have a browser based setup like Gmail or Yahoo. There are no synched social media apps allowing you to open one tab and view everything. And absolutely no printer functions. All of these things should not be a problem on a business class tablet. Rim (the maker of Blackberry products) should know that consumers want these things, especially business people.

That said I love my Playbook because having a Blackberry phone eliminates all most all the problems. I don’t need wifi, emails sent to my phone can be read, and there is a phone app that links some of the social media.

When the newest operating system gets released next month, even the remaining obstacles will be eliminated. There will be native email, a ramped up Doc’s to go, and a really nice integration of email and social media. Check the Blackberry site here for more details.

So, now you know of one more tool that may make your business life a little less hectic.