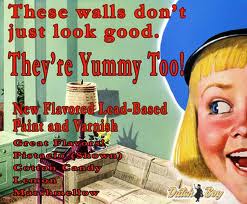 ﻿Many people wrongly assume that if a home was painted with lead based paint (LBP), it can be found throughout the house.  Surprisingly, this is a wrong assumption.  LBP was considered a premium paint that came with a higher cost.  It was used on surfaces that needed the durability that can be found by adding white lead to paint.

In my lead inspections, I have found it on one wall, but not the wall next to it.  Whole homes have been checked and found to be clean of lead based paint, except on the backside of only one door.

As we read, exteriors have higher percentages than interiors of lead.  Windows, railings, siding and doors have the higher chance of lead, while eaves, balconies and stairs less likely.
How much and where it is found, also depends on what part of the country you live in.  Naturally, you can expect more lead based paint in the North East of the country and much less the further South and West you go.  Boston, Cleveland, Milwaukee, New York, Philadelphia and Pittsburgh would have more than newer cities like Atlanta, Dallas, Las Vegas, Orlando, Phoenix and San Antonio.

Lead based paint is defined by EPA & HUD as any surface coating containing 1 milligram per centimeter squared.  So it’s also important to note that lead can be found in clear coats, driers and glazes.  Glazes that are used over faux finishes are often suspect.  On clear coats, varnishes have the highest odds of having lead content over shellacs and lacquers. While different metals were used in Japan Drier, lead was an all time favorite.  Lead was so favored, that Japan Drier was once known as liquid lead.

Glazes over ceramic tiles and tubs are for some strange reason, no considered lead based paint.  Mainly this is because these glazes are bonded.  However, if you refinish tubs and tiles, you should take precautions.  Some of the highest lead content can be found in these items and often found in homes newer than 1978.

Of course, with using percentages and odds, you always have doubts.  A professional painter can work in 50 homes and never touch LBP.  Then, the next 4 homes he preps could all have high levels of lead concentrations and could harm themselves, their own family and their clients.

One thought on “Lead Based Paint, where it’s found.”