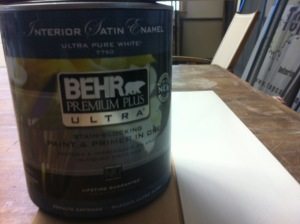 This is a big topic in the residential paint world lately.

The fact of the matter is that “self priming” paints are really nothing new. They have just been marketed recently in new and more creative ways. Benjamin Moore Regal, the old stuff of ten years ago, had self priming characteristics, and it said right on the back of the can that it could be used as its own primer on raw sheetrock or patches. That was ten years ago. It was more of a convenience thing historically than a celebrated best practice.

The current generation of paint lines from different manufacturers have taken that handy little tidbit of performance info and stamped it right on the front of the cans. Some manufacturers have taken great liberties with the marketing of this concept, bordering on Decepticon-like tactics. There is a good bit of reading between the lines, and “well they don’t actually say…” associated with some of these products. This is all why I thought it was appropriate to do a little testing and share the results here on bloggingpainters.com.

On my own blog, I have been looking at primers pretty closely for the past couple of years. Never from the perspective of whether or not they are necessary, but more looking for the best and most efficient performance, regardless of application method.

For this round of “paints that don’t require primer” testing, I decided to run two brands next to each other on the bench. The paints are Behr Ultra and Sherwin Williams Duration. Some contractors around the internet have shared glorious raves about the miracle of Behr, and of course Duration has also had its share of love and hate cast upon it in recent years, often related to its price point versus performance. I even saw one contractor do what was promoted as a significant and unparalleled testing of the Behr line, which basically amounted to praise of the paints leveling characteristics on 18″ trim samples. Most paints level pretty easily over 18″. Thats not conclusive testing. Both lines of paint, Behr Ultra and Duration, claim to not need primer.

This is where fine print and semantics come into play. If you read the Ultra and Duration cans, they are recommending that the paint itself be used as primer. Here is my question: why would would anyone pay a premium price for a paint to do a job that a lower or equivalent priced primer is made specifically to do?

I have spoken with many paint manufacturers directly, and most will acknowledge that there is only so much that can be stuffed into a single can of paint, from both a chemical and a performance standpoint. Even if a paint is capable of priming, what is being saved by doing it with one product? None of them are claiming to do it all in one coat, and in most cases it really takes 2-3 to get to a professional standard in terms of sheen, aesthetics and thickness. These things start to come off like jacks of all trades, masters of none. Good at being primer, good at being paint, but not excellent in either discipline. It is a very subjective business.

In this bench test of Behr Ultra and Duration, I applied two coats of each to raw cedar. I waited a week and then sanded both in sections at 80 and 150 grits. I also scratched and scraped on them pretty heavily. You can see the results in the attached video. Also, as the Ultra can claims to kill knots as well, I did a knot test on the product, on a piece of knotty pine – 3 coats were applied over the knots. The results were not so good.

I chose to put Behr Ultra on the bench with Duration because Duration has been one of the premium benchmarks for the past few years in the arena of paints that can prime. While Ultra comes at a lower price point, it is still a $30+/gallon can of paint.

Ultra appears to be marketed by Behr as their best stuff. While it probably is the best they have, it strikes me as more parallel with the lower to mid lines offered by Benjamin Moore and Sherwin Williams, which are also surprisingly good these days. Ultra would be a great paint for homeowners and diy because it is easy to use, and it really is a good paint. Some of the marketing about it suggests that it will be a life changing experience. I guess time will tell, but in this quick glimpse, it didn’t show any remarkable innovation. Regardless of paint and/or primer systems, on bare wood it still takes 2-3 coats regardless of product to achieve a professional standard. But still, like most premium lines from most manufacturers, Ultra is a good paint. Surprisingly good actually, but it does run some of the risk that other products have been pinged with, which is marketing that promises an experience that no product really delivers.

My biggest criticism of Ultra is that when sanding, it doesn’t powder up very well. It forms tiny, sticky little pills that are hard on abrasives. Most other premium trim paints form a fine powder when sanded through a range of grits.

The concept of paint and primer in one can is tempting to homeowners and contractors alike. I guess it is human nature to look to eliminate steps where possible. The biggest value would be to the homeowner who would rather just deal with one can of paint instead of two. Not so much an issue for most professionals, though. We see it all the time in real life and on the internet – the desire to streamline the prep/prime/paint process. There are actually many ways to do this without compromising. Shortcuts for their own sake often come with a cost because they usually involve skipping a step that would be best not skipped.

If a minimum of 2, and at times 3, coats are needed regardless of brand or system, the results in my experience are always better if the initial coat is primer. And that includes extensive experience with Aura and Duration. In my opinion, regardless of manufacturer or line promoting self-priming paint, primer is still the best insurance for aesthetics and performance…at least for the time being.