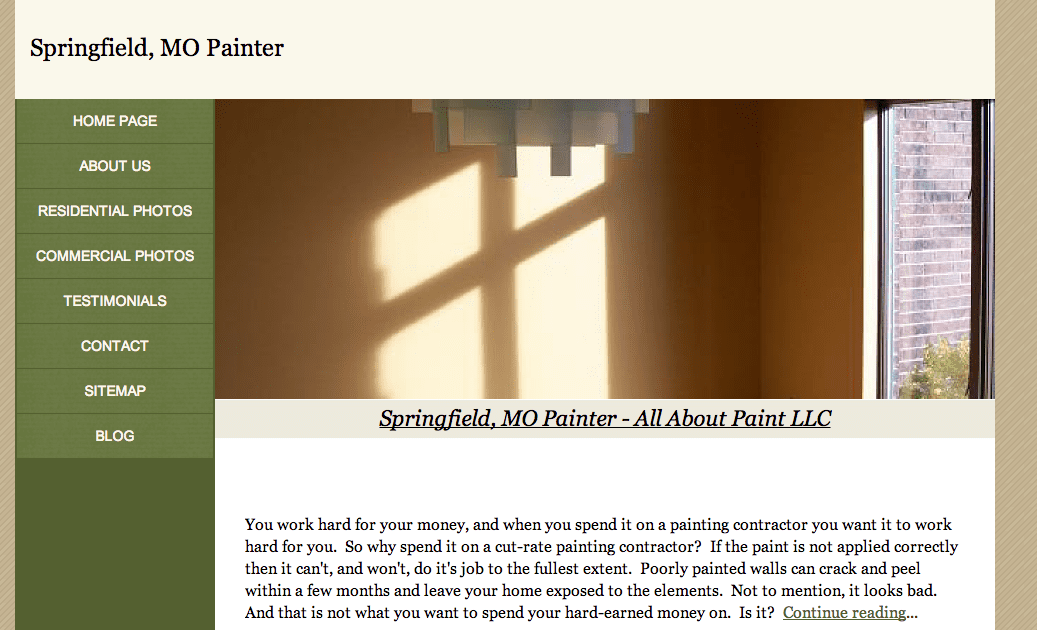 January’s website review featured All About Paint of Springfield, Mo. The owner, Don Goddard was able to join us, but as our luck would have it, he was having audio problems, be were able to continue on thanks to Tess for relaying his text chats! Don uses Go Daddy and the Sitebuilder platform.

Darren discussed logos and images in the header, you can get them made from sites like fivver.  The header should differentiate your business and show who you are. Darren also suggested removing the underline so that people do not try and click on it.  He also discussed ways to rearrange the content in order to be more positive.

Tess was impressed with the content and Don’s ability to tell his story and offered to help him correct some minor typos. Darren and Tess discussed a few other “nitpicky” items, these were items that were minor, and at this point we lost the recording again for a minutes (blasted technology!).

Darren discussed the theory of naming pages and longtail keywords as well as removing some of the pictures and links that may drive a customer off your site. Tess discussed that if you do keep Social Media links, they should open in a new window. There was also much discussion on the flow and navigation and Darren shared a old newspaper/print advertising trick.

Tess mentioned that for an “About Us” page, she really did not know anything about Don, he should add his name and picture. She suggested ways that he could reformat his good content for better readability. Darren also suggested making the content more about Don, not so much the “services” his company offers. Don agreed that he could make a new about us page and revamp this page as a service page. Tess suggested using “Why Choose Us” and Don liked that!

Darren explained the benefits of offering a lifetime warranty as opposed to the current ones being offered. We had discussed this in detail on the review we did on Burnett Painting recently.

Again, we discussed properly naming photos and naming the page. Tess pointed out that he has some great content and has a great way of speaking to the customer. She suggested moving it off the residential photos page and moving it to a residential services page with an attached photo gallery. Darren went into more detail on how to funnel customers thru the site. Darren also recommended resizing the photos so the site loads faster.

Darren discussed a few simple ways to improve the site by optimizing the pictures. The use of consistent font was discussed as well.

This is another place where we all agree that Don’s picture should be there. We also discussed the use of the sharing tools. Don has a promotional offer on the page and Darren suggested ways to use that more effectively.

These should not be in the navigation, but can be in the footer.

Darren suggested his content was not customer centered. If Don wants to write about business issues, he is welcome to post here at Blogging Painters. Darren states that anyone who wants to blog should write 30 posts. Some of his content was copied from another site and we discussed attribution and how much content you can use. Tess also suggested using videos and infographics on your blog.

We also discussed strategies for using Facebook and using that to drive traffic, Tess mentioned how well Topcoat Finishes and Warline Painting use Facebook well.

Tess suggested using picmonkey for creating images. We also discussed the merits of using WordPress as a web platform.

Thanks to all attended and participated, especially Darren and Tess, be sure to check their sites for more information!