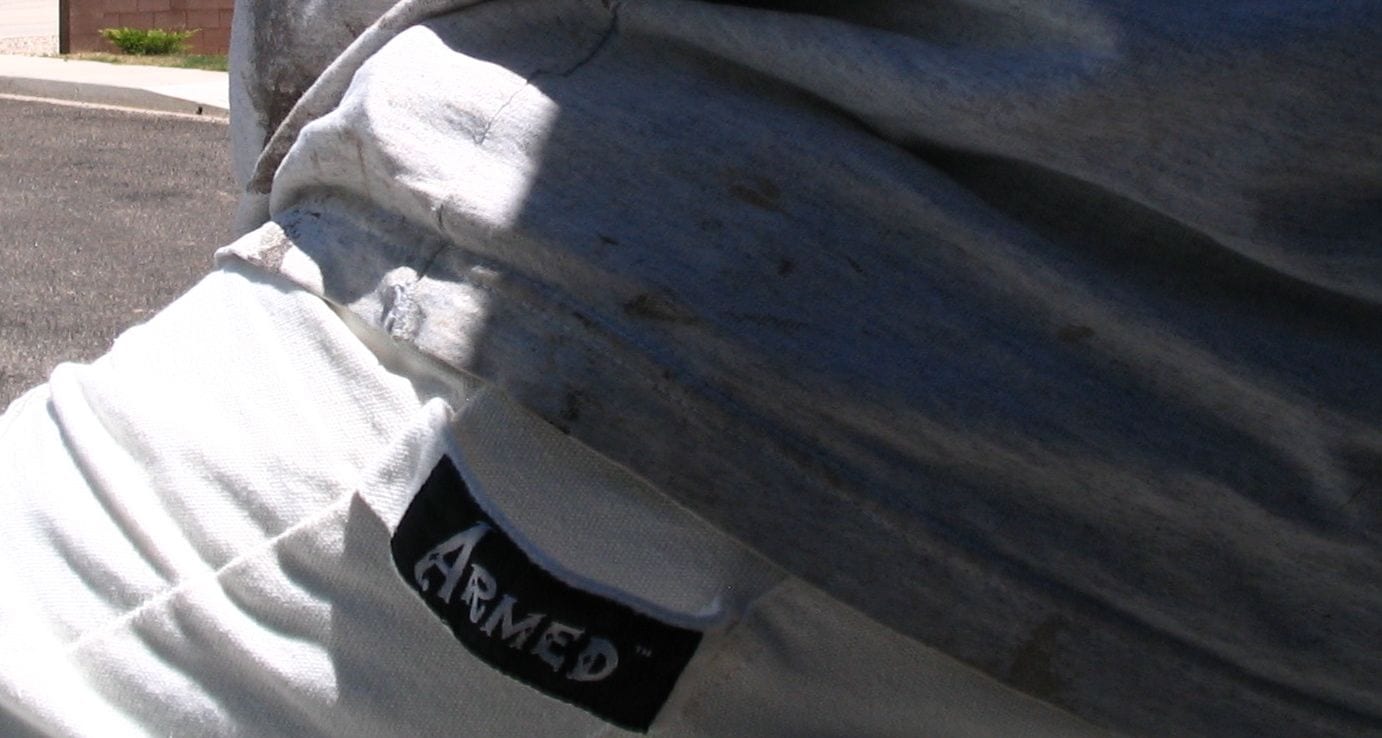 One of the fringe benefits of a having your wife and business partner involved in the paint industry online is the opportunity to learn about and try new products. I am still using and enjoying the new Purdy products I received and wrote about here. I’m sure I would have bought them when they reached my local stores anyway, just cause I like checking out new stuff, but it is pretty cool to try things out before hand.

I was pretty excited when Chris told me about the Shootout, I really had my eye on the HVLP and was rooting for her to win that. When she told me that she won a pair of paints, I was a little disappointed. When I got a package in the mail containing three pairs of pants,  I cheered up a bit. Then I put a pair on before Chris even had a chance to wash them. Now I have been wearing the Dickies from Sherwin Williams for 30 years without any complaints, but when I put these on, I could feel the difference.

They are both 100% cotton, but the Armed feel a little thicker and rougher, stiffer, and I like that, they felt like they fit a little better. I like how the bottom of the legs are more flared than the Dickies, they go over my shoes a little better instead of sitting on top of the tongue. The same size pants in Dickies also feel a little tighter. Another difference I notice was the pockets, on the Armed, they are much shallower than the Dickies, I actually lost some money one day from pulling something else out of my pocket! The other pockets are great. I ordered the knee pads and tried them out last week, sure does make a difference! I never could find knee pads that were comfortable, and they are usually at the bottom of the toolbox, having them built in is pure genius! I ordered several pairs for the crew, and I am sure they will be as happy as I!

Scott Burt from Topcoatreview wrote about them in American Painting Contractor,

The value of these pants lies in the ability to carry all the necessary hand tools effortlessly, and the safety benefit of serious and comfortable kneepads. Anytime a tool will gain my company efficiency and safety in one shot, I have to take a look. Armed Professional Work Wear has hit the mark.

Tommy Johnson of  Johnson Home Construction had this to say about Armed painters pants.

I will admit I had my doubts that these pants would come close to living up to the glowing reviews I read on several sites around the web, and even in print. I honestly thought its a pair of pants, they have been around for centuries. How could one company improve them so much? Even with those doubts I decided to order five pairs and give them a try myself. The first impression was wow these things are heavy, wearing Dickies for years they were literally twice as heavy.

I quickly adapted to the heavier weight, and found the knee pad inserts to be wonderful. I really thought they were just a gimmick, but you never realize how great something like that is until you paint a few hundred feet of baseboard, and at the end of the day your knees aren’t aching. I have also worn them for over six months now without a single hole developing. Something other pants would never be able to do, and I always have to toss them before they are to dirty to look presentable because of that.

Pockets are something I admit I never thought about, that is until I stated wearing Armed. I know painters who are reading this have probably bent over to pick up a five in one that fell from your side pocket designed to hold it thousands of times in their career. Even worse when you are on a ladder and have your tools catch and come tumbling down requiring you to climb down to retrieve it. Armed really put a lot of thought and design into this. The pockets designed to hold your most used hand tools are up front as to not catch on something when climbing, and are perfectly designed. You would have to be upside down for something to fall out. Anyone who is upside down on a ladder has more pressing things to worry about than a dropped tool.

In closing I have suggested these pants to many painters now, and will continue to do so. The extra price is justified in the longevity alone, and when you add in all those extra niceties its an easy decision to make.

Sounds like we have a winner! You can find Armed Workwear Pants online or find a store here.