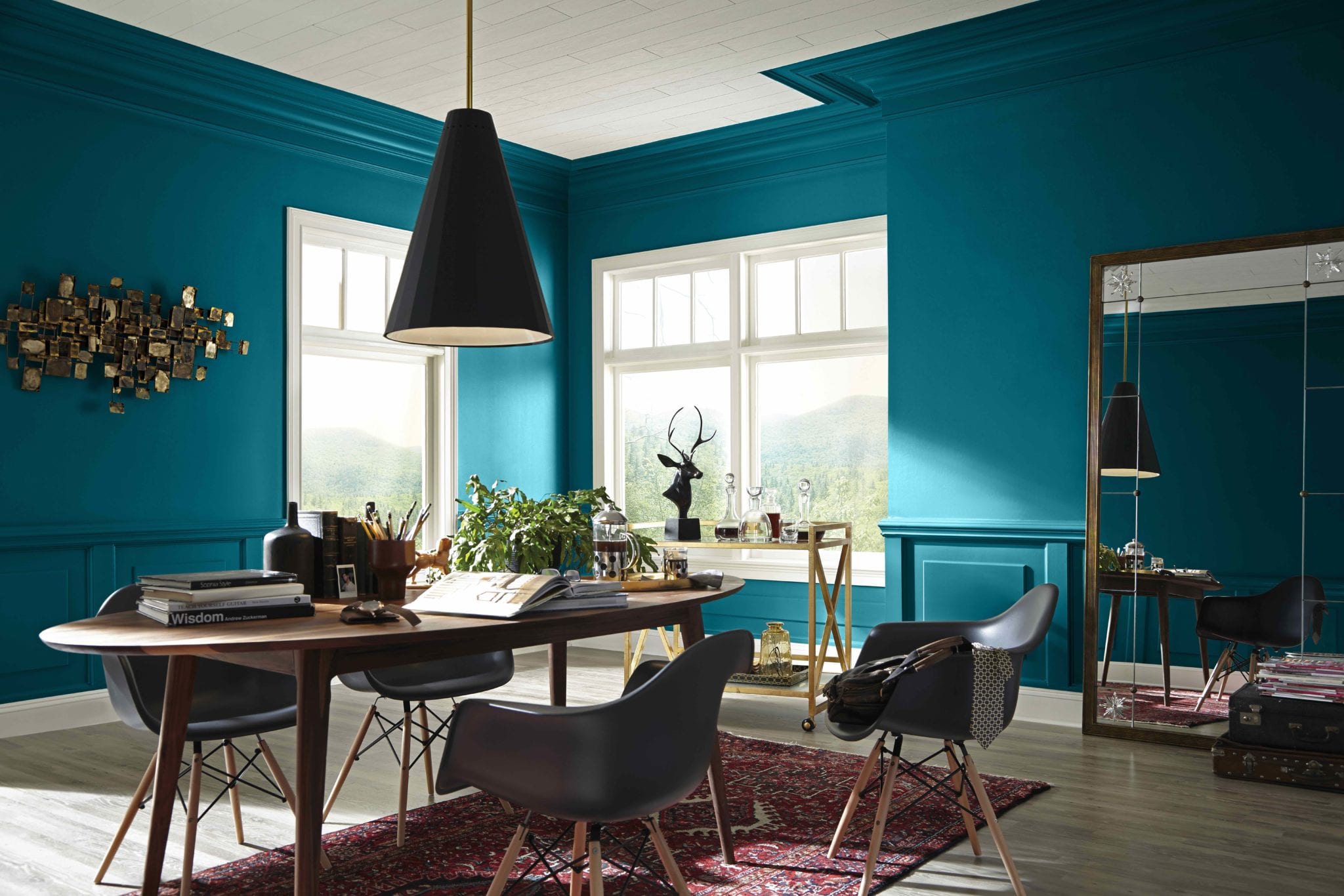 CLEVELAND (OCTOBER 3, 2017) — A fusion of rich blue with jewel-toned green, the 2018 Color of the Year, Oceanside SW 6496, represents the growing desire for color that is both accessible and elusive. A complex, deep color, Oceanside offers a sense of the familiar with a hint of the unknown, bridging between old and new, light and dark.

“Green-blues in deep values, such as Oceanside, respond to changes in light, which is a quality that creates intense dimension, It is a tremendously versatile color, and harmonizes with other diverse color groups.”

Bringing the Color of the Year into the home

Blues evoke a multitude of moods and associations depending on hue, shade and application. Despite this variety, they are universally perceived as intelligent, honest and interesting—making blue the most beloved color worldwide. Oceanside’s multi-dimensional look could create a welcoming statement as a lively color for a front door. This green-meets-blue tone can also boost creative thinking and clarity of thought in a home office, or invite meditation and introspection in bedrooms or reading nooks.

“People today have a growing sense of adventure, and it is making its way into even the coziest corners of our homes. We are craving things that remind us of bright folklore, like mermaids and expeditions across continents. Oceanside is the color of wanderlust right in our own homes,” says Wadden.

Oceanside’s versatility allows it to play well with many colors. It is a bright counterpart to equally eye-catching colors, such as Exuberant Pink SW 6840 or Honey Bees SW 9018, or it can rest relaxingly alongside other blues, such as In the Navy SW 9178..

It is also the ideal companion for corals and copper metallic tones. Oceanside is universally embraced by design styles from mid-century modern to Mediterranean-inspired, and traditional to ultra-contemporary.

The Color of the Year in commercial spaces

Oceanside offers familiar inroads to bold color for developers, builders and interior designers. As with other colors found in nature, Oceanside can channel healing and tranquil emotions, but also spur heightened levels of creativity—making for a peaceful first impression in an office or hotel lobby and a bright, imaginative environment in classrooms.

“Oceanside is reminiscent of the multi-tonal blues found in nature, offering a memorable, yet calming effect for public spaces,” says Wadden. “It is a new twist on navy, a common color for use in commercial spaces. When placed correctly, it is refreshing and offers dimension and depth as a statement color.”

Channeling the inspiration of indigenous patterns and artisan styles embraced by many community spaces, Oceanside pairs best in commercial settings with camel-colored neutrals such as Tatami Tan SW 6116 and Tamarind SW 7538. As a base color, it effortlessly accents pops of red, like Heartthrob SW 6866 or Borscht SW 7578.

A part of the ‘Unity’ palette that was announced earlier this year, Oceanside is one of the colors in the 2018 Colormix Forecast. For more information on the annual Sherwin-Williams Colormix Forecast, visit swcolormix.com.

About Sherwin-Williams Color of the Year

Led by Director of Color Marketing Sue Wadden, the Sherwin-Williams global color and design team travels the world to research and identify key trends that influence the way we interact with color. From those findings, the team selects the strongest influence and then decides the Color of the Year. This is the eighth year Sherwin-Williams has named an official Color of the Year with the 2018 selection, Oceanside SW 6493. A list of colors selected includes: 2011: Indigo Batik SW 7602, 2012: Argyle SW 6747, 2013: Aloe SW 6464, 2014: Exclusive Plum SW 6263, 2015: Coral Reef SW 6606, 2016: Alabaster SW 7008, 2017: Poised Taupe SW 6039. For more information visit SWCOTY.com.

For more than 150 years, Sherwin-Williams has been an industry leader in the development of technologically advanced paint and coatings. As the nation’s largest specialty retailer of paint and painting supplies, Sherwin- Williams is dedicated to supporting both do-it-yourselfers and painting professionals with exceptional and exclusive products, resources to make confident color selections and expert, personalized service at its more than 4,200 neighborhood stores across North America.