Most people don’t know that Josh Abramson was a high school dropout, or that he grew up in a single parent home with a mother who struggled to provide basic necessities. The family relied on government assistance to put food on the table and frequently moved, forcing Josh and his younger sister to attend multiple schools.

Despite these challenges, Josh used his family’s struggles as motivation to build a better life for himself and future family. When he was 21 years old, he started A.Allbright Wallpaper Hanging & Painting in 1987 while living in a small apartment with his mother and sister in Granada Hills, California.

Over the past 29 years, Josh has grown to become an industry leader through his nationwide speaking engagements, humanitarian efforts, and the innovative products he has developed for the painting industry as a whole.

In this interview, Josh talks about the importance of company culture, failures, where he’d like to see his company in 10 years, and a few other pieces of advice he feels other business owners could find beneficial.

The Importance of Company Culture 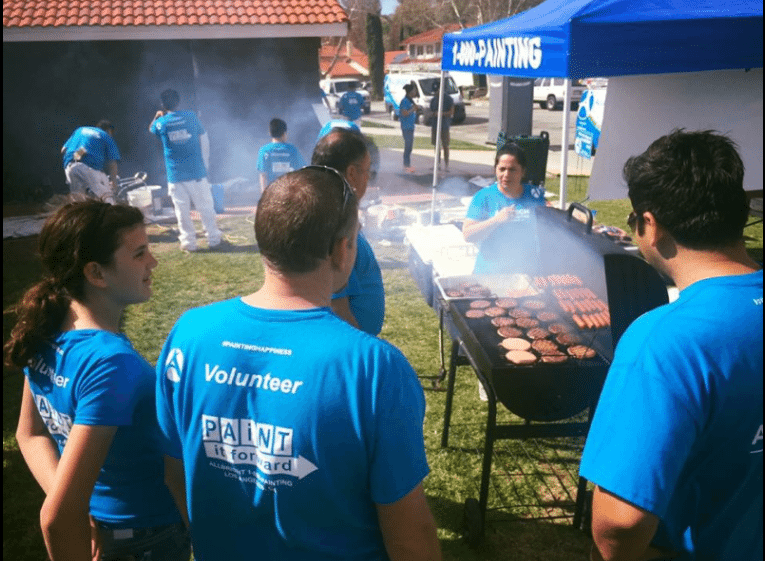 Josh, let’s start with your team – the people that work with you on a daily basis and help transform your vision for the company into a reality. Any tips you’d be willing to share on how to create an environment that keeps employees happy and motivated?

I guess if I had to point to one thing, I’d say it’s the “Painting Happiness” culture we’ve created at ALLBRiGHT 1-800-PAINTING. It’s something I’ve been working on since starting the company (without knowing it), and, especially over the past 5 years, have realized how important it is for us.

A big part of our culture is investing in employees which is something I’ve always been interested in. I put together a business plan that summarized what I wanted ALLBRiGHT to be known for. The first is that the company would be nationally known for its professionalism, our contributions to the trade, and our local community efforts. The second was to treat our employees like we would treat our best customers.

We invest in our employees through leadership and trade training, employee events, contests, and retreats. We’re always excited to recognize the personal and company achievements of our team.

I’d also think it’s worth mentioning our internal communication tool, Yammer, which has become so much more than just a communication platform for us. It’s now an area to encourage other team members about the projects they’re working on, including sales, safety practices, and also personally through sharing pictures of dogs, kids, etc. I encourage our employees to post on Yammer to build relationships with other employees. 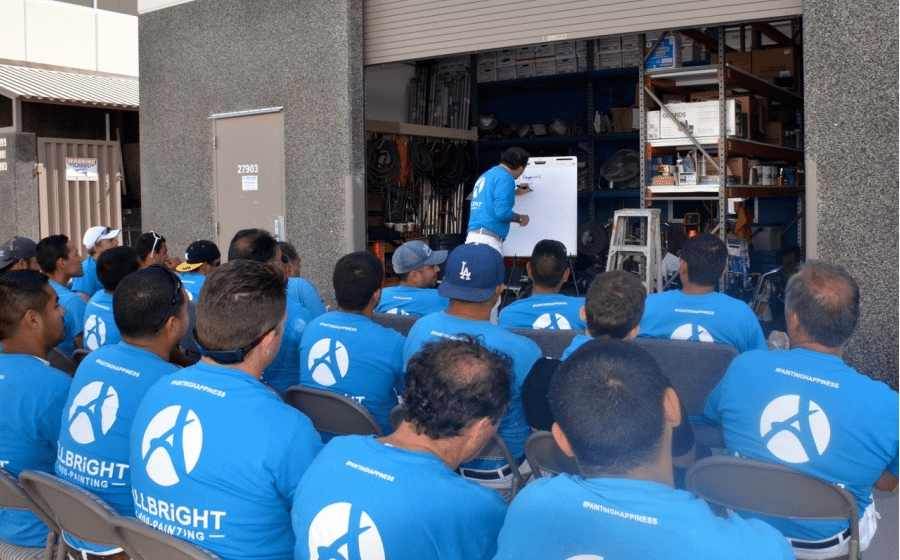 It sounds like you’ve really put a lot of time and planning into creating an awesome environment for your team. How do you find and hire people that are a good fit culturally?

We have been using our core values and culture to attract some of the very best employees. Our goal is to make ALLBRiGHT 1-800-PAINTING the “best” place anyone has ever worked. We strive for this every day and we work hard at making that happen.

Just yesterday when my Office Manager and Sr. Admin Assistant were asked what they like about working here by a person they were interviewing, they both had the same answer. They said they love working here because they get to be themselves, everyone is happy to be here, and there isn’t any added stress from co-worker conflicts because we all work toward the same goals.

It Needs to Be a Good Fit Both Ways

One part of our hiring process is a group interview. It’s a time for us to share our culture and our values and what we’re doing for our trade. It’s also a time for the applicants to get to know the company to see if it’s a good fit for them.

We also offer our Paint-It-Smart internship program as a way to bring on new team members who may not be experts in the trade, but are a great fit culturally.

Josh, what would you say is one of your biggest failures as a business owner – what happened and what did you learn?

One of my biggest failures was not identifying our core company values and culture sooner, and allowing others within the team (especially out in the field painting) to develop their own values that were in direct conflict with ours. Once I identified these top core values and became passionate about them, it was a game changer. As an example, we no longer held on to a fast, money-making, productive painter/employee who didn’t share in our vision. We invited them to go be successful somewhere else, and we developed our “culture” that encouraged our employees to be happier, faster, smarter, more trustworthy team players.

Improving Upon Systems That Aren’t Working

Talk to us about areas where you’ve innovated in the industry – what was your inspiration?

My goal is to always make life better and improve on a system that isn’t working. Many years ago, I saw that our current estimating process wasn’t something we could grow our company with. Our trade association was coming out with one that was very complicated and I wanted something that was very simple and faster than what was currently available. I came up with a way to integrate a system with Word and Excel to develop a scope of work on the spot. If a customer was interested in moving forward they could sign before we ever left the driveway.

The One Step Estimating App was also based on allowing us to help someone who didn’t have years of estimating experience to come up with a consistent, fair price that was repeatable. I set out to fix a problem in my company and, after I showed it to a couple of people, they said, “When can I write a check?” Back then, before a lot of contractors had fax machines or even emails, it was way ahead of its time.

We also recently launched an online paint estimate tool on our website that allows a customer to enter details about their project and receive an instant quote – it’s pretty cool! Our hope is that this will make the estimating process quicker and simpler for both our customers and ALLBRiGHT estimators.

What are the company or personal awards you’ve received that you’re most proud of?

I’d have to say the PDCA’s Humanitarian of the Year Award that we won twice for giving back to the trade and our local community. It’s an award they only give out when someone has done something exemplary. We received the awards for helping our painting trade by developing the One Step Estimating App and for teaching other painting contractors how to start and grown their own Paint-It-Forward programs. It was a shock both times; I didn’t even know I was in the running! I was also honored to win the Leadership Award from Summit Services at their Grand Summit. It was a surprise, as I felt there were much better leaders out there.

Where would you like to see ALLBRiGHT 1-800-PAINTING in 10 years?

We are growing in size and in a lot of different ways that others want to be a part of. I’m constantly being asked by other very smart individuals if they can be a part of this “Painting Happiness” culture in other areas that we don’t service.

What’s the one piece of advice you’d like to leave us with?

It’s okay to strive for building a business that develops leaders that are better than you are. Oftentimes we have a lot of pride and don’t want to inspire people to be better than we are. I like to look for ways to bring people to my level and above. If I can make someone wildly more successfully than I am, then I’ve succeeded. There’s enough business out there for all of us.